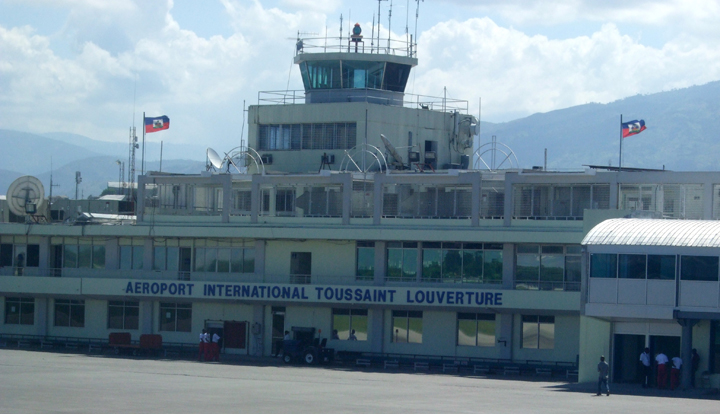 Toussaint Louverture International Airport  is an international airport located in Tabarre, a commune of Port-au-Prince in Haiti. The airport is currently the busiest in Haiti and serves as an operating hub for Salsa d'Haiti, Tortug' Air, Sunrise Airways, and Haiti Aviation. The main building of the airport works as the International Terminal. It consists of a two-story concrete and glass structure. Lounges and a few retail stores are located on the second floor of the main building. Check-in counters, gates and immigration facilities are on the lower floor. The Guy Malary Terminal (named after former Haitian Justice Minister Guy Malary) is used for domestic flights.

Port-au-Prince  is the capital and most populous city of Haiti. The city's population was estimated at 987,310 in 2015 with the metropolitan area estimated at a population of 2,618,894
The city of Port-au-Prince is on the Gulf of Gonâve: the bay on which the city lies, which acts as a natural harbor, has sustained economic activity since the civilizations of the Arawaks.The city's layout is similar to that of an amphitheatre; commercial districts are near the water, while residential neighborhoods are located on the hills above. Its population is difficult to ascertain due to the rapid growth of slums in the hillsides above the city; however, recent estimates place the metropolitan area's population at around 3.7 million, nearly half of the country's national population.
Intui will help you to fully enjoy your trip with its comfortable and affordable transfer.