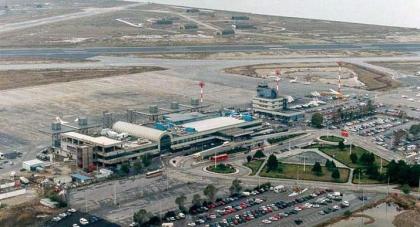 Thessaloniki is a port city of northern Greece and it is standing on the Thermaic Gulf of the Aegean Sea. The upper town and Ano Poli has the remains of the history of Romans, Byzantine, and Ottoman. The Rotunda has been a church and mosque both, is also included in the ruins of the Roman emperor’s Galerius’ 4th century Palace. The Great Fire of 1917 destroyed most parts of the city center. The city center was rebuilt in modern European layout in the 20th century. The city has many fine-class hotels and a few of the best restaurants. Musicians, artists, thinkers, and poets are a symbol of the city.

It has a single terminal consisting of 3 floors. The ground floor has been sectioned into two parts, one for the International, extra-Schengen flights and the second for national/intra-Schengen (domestic) flights. There is a shopping center on the second floor and it deals with the departures as well. The third floor has bars, and restaurants facing the runway.

There is a bus service operating between the Thessaloniki bus station and the arrivals and departures of Makedonia Airport. It takes almost 49 minutes to travel between the bus station and the airport. The fare for the bus is about 2 Euros and it is 1 Euro at a discounted price. Metered taxis are also available at the parking lots at the airport where you can hire a taxi to go to the city center in almost 30 minutes but it can vary with the traffic conditions. The rate of private taxi transfer is 20 Euros for the city center and the cost of the luggage is waived. Private cars and rental cars are also available at Thessaloniki Airport for a convenient, and comfortable airport transfer without involving any other transport as in the case of buses.

Many companies are operating at the airport and they offer a private car, taxi or shuttle bus airport transfers. Intui Travel is one of the best private taxi transfers with high class and comfortable cars and bigger vehicles like buses, vans, and limousines as well. One can order any class and capacity in vehicles according to their lifestyle and budget. It is a two-way service that means you can book an airport transfer through Inui travel both to and from Thessaloniki Airport. It is a safe, comfortable, and reliable airport transfer service.

Why one should book an advance airport pick up while traveling to/from Thessaloniki Airport?

Having an airport transfer booked in advance will be the best arrangement that you can do for a stress-free trip to any place especially if you are going there for the very first time. As you will not be worrying about looking for a proper airport transfer after reaching the airport as you do not know about which one is better than all and also language barrier is the biggest hindrance in a flawless air trip.

By booking a private airport transfer from a reliable travel company like Intui Travel, you will be free from any kind of stress throughout your trip. As you can book a private car for coming back to the airport on your last day at Thessaloniki, you will not be worried about reaching the airport on time via bus or taxi. You may have to leave your hotel very early to make sure that you are not going to miss your flight due to delayed airport transfer via public transport means.

You will be provided with the best airport transfer arrangements, no matter who is accompanying you. You do not have to worry about your toddlers or a handicapped fellow passenger, or a large group of people from your office traveling with you because Intui travel provided child seats for kids and wheelchairs for the disabled persons and a big van or bus option for a group as large as 150 passengers.

Have a nice trip in Thessaloniki!

Taxi & Transfer from Thessaloniki Airport (Halkidiki) to Chaniotis (Greece / Creet / Cyprus)
5 - Rating intui     5 - Rating of the transport company
Advantages of the transfer:
There were experiences of how they would meet and whether they would meet at all. Somewhere on the reviews there were such moments.
As a result, the driver with a sign is also Russian-speaking.
Return transfer at 5 am. Also excitement will not be late. In fact, GOOD MEN.
Disadvantages of the transfer:
did not have
16.08.2021
M Michotte Annick