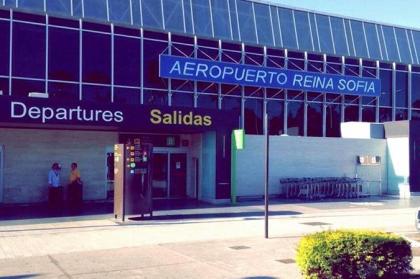 Tenerife South Airport — main airport Tenerife. It is situated 61 km from the island's capital city. Santa Cruz de Tenerife, and not far from the airport There are several popular resorts and hotel zones. Happy owners of international driving rights can rent a car directly in the airport and go all around the island without hassle. Taxis in Tenerife — white number on a roof, all they operate under uniform rates and on the counter. For longer trips, better to order individual transfer, as prices for taxi services here so little. On the island bus connection, it is the economical mode of transportation in Tenerife. Green buses connect with each other all the key terms resorts. Tenerife South Airport, you will be able to sit in green buses: №343 and get to the airport Tenerife North, №111 runs to the capital and back with stops at major resorts, №450 goes in the direction Granadilla and stops at several beaches. Tickets can be bought from the driver for cash or purchase cards at stops. However, the bus stop is not always appears next to the hotel you. So if you do not like to carry bags on itself, easier to book a Transfer from the airport to the hotel and back beforehand.
Intui offers a few dozen lines of transfers from / to Tenerife Airport, including the famous resorts hospitality and quiet area distant towns. You can book group or individual transfer, depending on the number of people in your company. Note that the site contains the full Intui cost of the trip without any hidden charges. Have a nice trip!

___
Tenerife South Airport (Reina Sofia) is located close to Tenerife. It handles 9000000 passengers per year. You can use bus, public transport or taxi to get to Tenerife, but you will meet unknown issues. If you take bus, busses provide transfers to multiple destinations, by that it will take more time to get to your destination. If you take public transport, it may sound a cheap solution at first, but expect to wait a few hours, if you arrive at night time. Consider that taxis can be far more expensive than private transfers, in case you are going by taxi. Intui offers fast and comfortable journey: you will be able to choose a suitable car for you, book a group or individual transfer. Intui provides transfers to popular directions, such as Playa de las Americas, Arafo, Golf del Sur, Los Cristianos, Los Cristianos Port, Las Galletas and Costa Adeje (Playa Paraiso). Have a nice trip!
###

Transfer at Tenerife South Airport (Reina Sofia). with us - it is reliable

In advance
We will send you pick up instructions relevant to the Tenerife South Airport (Reina Sofia)., contacts details of the local transport company and the driver's name & phone number

Brand & model of cars assortment
Choose your car by brand, by model, by number of passengers, by types of luggage

Door to door
You can book a transfer from Tenerife South Airport (Reina Sofia). to hotel, from hotel to hotel, between cities in Spain (Canary Islands)

Feel care of your trip
If your flight is delayed, we will wait
No hidden cost
The price for transfers Tenerife South Airport (Reina Sofia). is full and final

Everything is done online
Free order amendment in your Personal Account